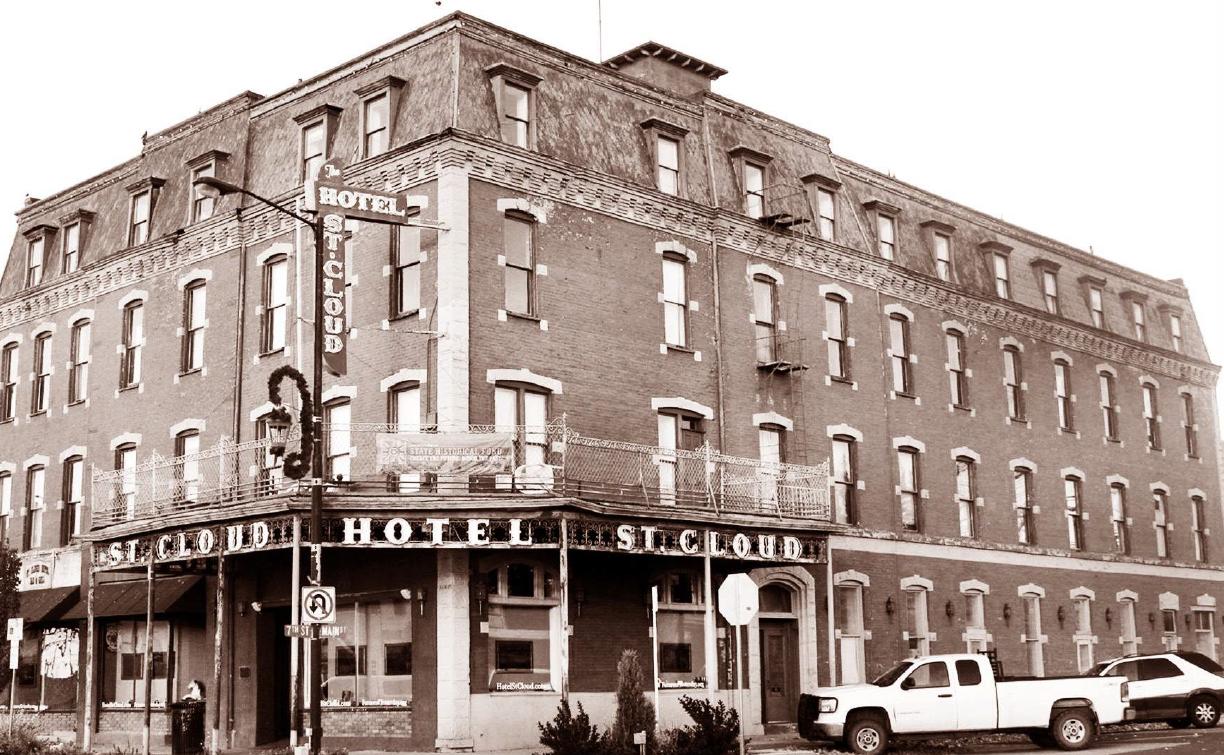 Excerpt from Cañon City Colorado: Every Picture Tells A Story

In the 1890s, it was the envy of every hotel owner in Colorado. It offered steam heat, electric lights, running water, an elevator, and a first class dining room with linen tablecloths and napkins and snappy waiters. It had thirty guest rooms with private baths (and thirty without) and a horse-drawn carriage to ferry guests from the passenger train depots nearby.

This was the St. Cloud Hotel, one of the finest hotels in Colorado, and long-billed as “The Health Seeker’s Resort.”

The St. Cloud Hotel was first established not in Cañon City, but in Silver Cliff, Colorado. The year was 1883 and the proprietors were Abell and Bracken. Often mistakenly believed to be the former Powell Hotel, it was built during the apex of the silver mining boom in this historic city.

In the early days, if you lived in Cañon City and desired to visit Silver Cliff, you had to take a stagecoach run by the Colorado Stage Express. With a railroad line nowhere near the town, the journey would have taken you seven hours over rough road during unpredictable weather.

A railroad did eventually come close to Silver Cliff— about two miles away, in what is now Westcliffe—but when the mining era died, the St. Cloud seemed to die with it. Gone were the miners, the gamblers, dance hall girls, and traveling businessmen who frequented the hotel’s well-appointed rooms and gone were the days of reckless abandon when cash flowed easily from barrooms to bedrooms and back again.

Most of the ore mills shut down and the population dwindled. The town became a ghost of its former self, so the St. Cloud’s owners made the decision that forever changed the future of the hotel: they dismantled it and moved the hotel, brick by brick, to Cañon City.

In the Spring of 1887, the hotel was taken apart, and using freight wagons, hauled to Westcliffe, then loaded onto the Denver & Rio Grande freight cars for the long trip to Cañon City, where the building was reconstructed at its present site at 631 Main Street.

At that time, Seventh and Main was considered far from downtown. The city’s main business center was located between First and Fourth Streets, with the primary rival—the McClure House— located on the 400 block. But the St. Cloud’s owners had chosen their new location carefully. As the town grew, new residents and new businesses moved eastward—toward the St. Cloud.

Since the relocation of the hotel, Cañon City has seen many changes, and the St. Cloud many owners. The hotel has changed hands almost two dozen times, along with several name changes, as well. During the first twenty-five years of its existence, it was known as the St. Cloud, but when it was sold in 1908, it became the Hotel Denton. The year 1915 brought new ownership and a new name: the Miller Hotel. This was followed by another name change in 1918 to the Hotel Cañon. For sixty-nine year the hotel operated successfully under this name until coming full circle in 1987, with new ownership resurrecting its old name of the St. Cloud Hotel.

In the 1890s, it was the envy of every hotel owner in Colorado. It offered steam heat, electric lights, running water, an elevator, and a first class dining room with linen tablecloths and napkins and snappy waiters.

In the last one hundred years, the St. Cloud has been the center of many activities, some memorable and positive, others less so. For many years, as early as 1890, it was the site of numerous high school prom celebrations, civic meetings, and Chamber of Commerce banquets. From the 1930s, and lasting many decades, it served as the headquarters of the Continental Trailways office, with buses doing brisk business with departures several times a day. In the 1940s it was the ticket office for Monarch Airlines when it operated out of Freemont County Airport. And yes, in 1927, the north wing of the St. Cloud Hotel also served as state headquarters of the Ku Klux Klan.

Of all the hotels in Colorado, none has been more associated with the entertainment and film industry than the St. Cloud. Buffalo Bill Cody and Calamity Jane stayed here in 1908 when Cody’s Wild West Show stopped for a few performances. During the silent picture days of 1910 to 1913, the hotel was the Colorado headquarters for the Selig Polyscope Company from Chicago, and it provided the sleeping quarters for cowboy stars Tom Mix, Bill Duncan, and Joe Ryan.

During a huge fire on the fourth floor of the hotel in 1914, the cast and crew of the Colorado Motion Picture Company helped put it out. At the same time, they also gained several hundred feet of footage for a subsequent film project. And from the 1940s on, the building has been home to actors such as Burt Lancaster, Robert Walker, Slim Pickens, Broderick Crawford, Charles Bronson, Scott Brady, Hugh O’Brien, and many others.

In the ensuing years, the fourth floor of the hotel (which was added in 1887 when the three-story building was reconstructed) was converted into six apartments, with the remaining thirty-one guest rooms located throughout the first three floors. Banks, barber shops, coffee houses, beauty shops, gift shops, a men’s store, a print shop, dress shops, an art shop, and a doctor’s office—all have been part of the St. Cloud Hotel’s long and colorful history in Cañon City.

Throughout good times and bad, it seems the St. Cloud Hotel has always been a valued and vital member of the community, long in our memories and historically irreplaceable.

This site uses Akismet to reduce spam. Learn how your comment data is processed.